Peering through the narrow tunnel to the tiny aperture at the end, I wondered how the hell I was going to squeeze through, let alone with my bike. If I hadn’t know it’d been done before, I’d have sworn that it wasn’t possible, but having seen video evidence of the HDDN media crew doing it, I figured that if four blokes could manage, I’d probably be able to squeeze my dinky bike and diminutive self through. Besides, after hiking up a steep, rocky path, which I had no desire to ride back down, I was prepared to dislocate joints in order to get to the other side. 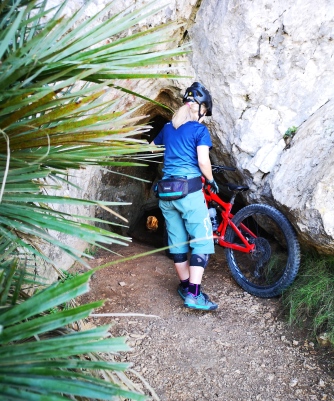 Our adventure had started in the pretty little Valenciana town of Polop, staring up at the imposing rocky plateau of Sierra de Bernia that towers above, and inside which we now found ourselves ensconced.

Aware that it would be a challenging ride, we’d driven as far up the steep, rutted road as we could, until the van made it clear that it didn’t want to go any further. Deciding it was wise to listen to its shunts and grunts of displeasure, we left it to rest in a conveniently positioned layby and continued up the rest of the steep track by bike, engaging Eagle from the outset. When the road petered out, we joined a narrow singletrack trail, which quickly became too demanding for even Dan’s gargantuan legs and rock hopping capabilities, leaving us no option but to hoist our steeds on to our shoulders and hike.

After a while we arrived at the ruins of an ancient fort, which gave us the perfect opportunity to take a breather, whilst exploring its dark recesses intact arches.

From here we were able to enjoy a well-earned descent over to the other side of the range, following a rocky singletrack trail that was techy in places and fast and flowing in others. Once over the other side, we started to climb again, with pedalling quickly giving way to pushing, hiking, and ultimately scrambling, as the terrain got progressively steep and inhospitable. 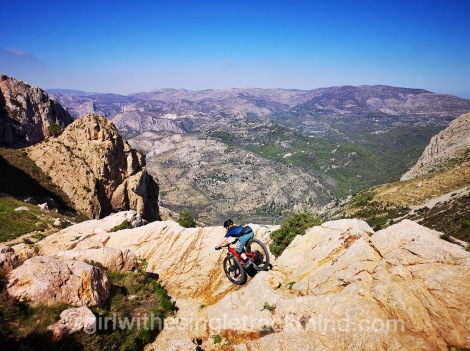 As if clambering up boulders with a bike balanced precariously on one shoulder isn’t hard enough, a herd of resident goats decided to heighten the challenge by kicking large rocks at us from above.

After avoiding a narrow miss, we decided not to hang around, and made a final push to the top with increased haste. Near the top we encountered a family of walkers coming down who clearly thought we were mad.

“You do know there’s a narrow tunnel at the top, don’t you?”

“Yeah, yeah, it’s fine”, we replied, despite my certainty of what lay ahead being based purely on Dan’s word.

As we approached the crack in the rock that marked the entrance to the tunnel, I started to understand the reason for their concern. Although the opening was big enough for both me and my bike, it quickly narrowed to tiny passage with a hole at the end that barely looked big enough to fit my head through, let alone my whole body, and bike. However, assured by Dan that we would both fit, I took the front wheel off my bike, hunkered down, and shuffled deeper into the tunnel, grateful for my helmet and kneepads. 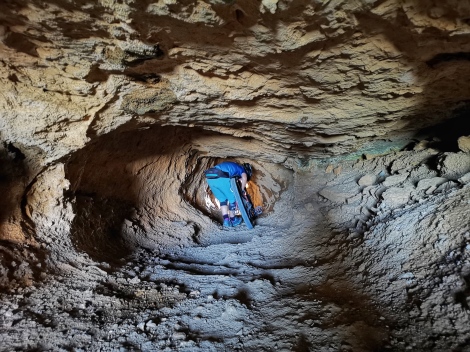 As sunlight started to penetrate, lighting up the ground beneath my feet, I tentatively lifted my head, and was greeted with the most spectacular view.
The tiny hole that I’d just squeezed through opened into a massive cave that looked out over the peninsula, surrounded by a vast expanse of hazy blue.

After reassembling my bike, I hopped down from the ledge onto which I’d emerged, and headed for the mouth of the cave to soak up the view and the sunshine.

Below us, acres of olive groves stretched towards the coast, and on the far side of the peninsula we could just make out the concrete sprawl of Benidorm in the distance.

When we eventually managed to tear ourselves away from the picture perfect vista, we dropped into the steep, rocky tech fest that lay in wait. What started as an enjoyable challenge soon became increasingly difficult to ride, with nadgery uphill sections to frustrate my efforts further still. The descent culminated in a steep open scree slope, which nearly pushed me over the edge, in more ways than one, and at this point that I started to question whether this route, as great as it had been, might have been best just tackled on foot.

We eventually arrived back at the path that climbed up to the fort, and despite the temptation to head straight back down to the van, we heaved our bikes back onto our shoulders and headed up to the fort again for one final descent, which Dan convinced me would be worth the effort. 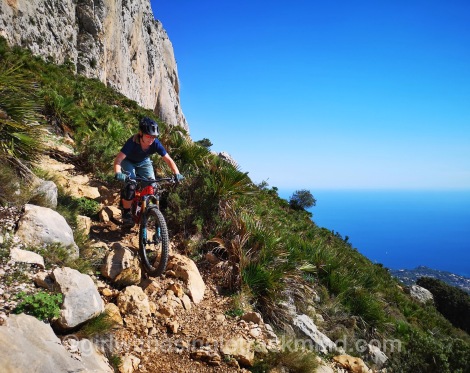 Fortunately he was right, and we enjoyed a sweet flowing singletrack descent all the way back to the van, by which time my sense of humour had returned.

It had been an epic adventure, and one I’ll remember for years to come. Although some of the route was really difficult to negotiate, on both the ups and downs, there had been some great descents, incredible views and, most of all, the unforgettable experience of squeezing through that tiny tunnel.

Looking up at Sierra de Bernia from Altea the following day, it felt pretty cool to know we’d been all the way up there with our bikes and ridden down its precipitous sides, for the most part! We tried to locate the mouth of the cave, but despite seeming vast at the time, it was barely discernible from down there, which just added to the mystique of our adventure all the more.