They say you should carb load in preparation for a big race, so for the final round of the British National Enduro Series I thought I’d go all out, with a week of carb loading in the carb capital of the world. However, after seven days of gorging on pizza and pasta in the Italian sunshine, I returned to a drizzly UK, doubtful whether I’d even be able to fit in my mtb shorts, let alone ride fast down an enduro race track; a fear that was heightened further still when I spotted the race plate from the last round of the series still attached to my bars, and realised that I hadn’t actually ridden my bike for two weeks.

Nevertheless, I packed up the van and set off to Machynlleth in mid Wales for my first taste of riding in the Dyfi valley. The sixth and final round of the British series was being hosted by the Welsh Gravity Enduro Series, and as with Round One in Afan, a mash-up event on the Saturday meant that our times for practicing certain stages was restricted.
So, after signing on bright and early, I headed off to check out stages three, four and five before the 11.25am cut off.
Stages three and four had been built especially for the race, and as I slid tentatively round the tight grassy turns and down the fresh clay chutes, I was super conscious of the fact that they would be riding very differently by the time it came to race them, especially if the rain that was forecast to fall overnight came to fruition.

Stage five had been raced before, so the myriad sniper roots were already laid bare, taunting us with their precarious positioning. At the top of one particularly tricky section, they sprawled across the entire corner, forcing us to take the outermost line, which, in turn, fed into a tight, steep, sloppy rut, which you just had to steer down and hope for the best. Lower down the gradient eased off, leading to a long frantic pedal to the finish line.
Reserved solely for the BNES race, stages one and two were a step up from the other three, both in terms of length and difficulty. Located in a different area of forest, the  never-ending fireroad climb to the top reminded me of the Golfie, and the stages themselves were also reminiscent of that sweet Tweed Valley gnar.
Stage one was a long, twisty descent that wove its way through tight gaps in the trees, with slippery roots in inconvenient places, and endless troughs to pump in order to keep any flow.
However, it was stage two that had everyone talking, and was being branded the ‘Queen Stage’ for its steep chutes and tight, nadgery corners, which were certain to claim a few victims, myself included. A close encounter with a tree saw me having to push back up the steepest section for a second attempt, which fortunately went a bit more smoothly.
After finishing the loop we returned to the campsite, which was bustling with riders cleaning thick layers of Dyfi clay off their bikes in an effort to shed a few pounds before race day. Later on, the sound of spraying water was replaced by a live band, which kept us all entertained until it was time to retreat to our vans and tents to recharge our batteries.
I struggle to sleep the night before a race at the best of times, so when the heavens opened at 4am and dropped a tonne of water on the van roof, I didn’t stand a chance. 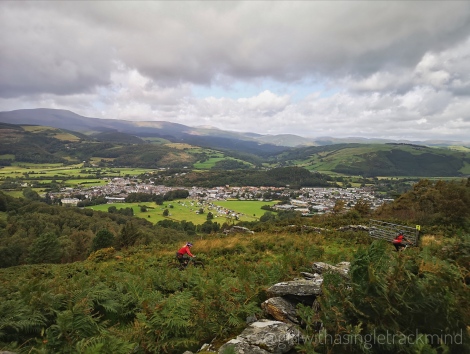 Fortunately it had stopped by the morning, but by then, any hopes of a decent night’s sleep, or remotely dry trails, were long gone. With a sense of trepidation, we headed up the long climb to the top of stage one, trying to sneak a peak at the state of the trails wherever possible. They were definitely much wetter, although it’d be impossible to tell just how they were running until my race run. Considering the amount of rain that had fallen overnight, it wasn’t too bad, although some of those exposed roots were killer. As a result, I definitely didn’t ride it as fast as I’d have liked, and a ‘moment’ half way down lost me even more time.
But, with tight transition times to make, and an even tougher stage ahead, there was no time to dwell on what had been. Stage two was the one that we were all dreading, and I was apparently so apprehensive about the steep section that I managed to crash just as I was dropping into it, which was far from ideal. Once I’d managed to scramble back on the bike, I made it down fine, but was still kicking myself for the stupid crash near the top.
Once again though, there was no time for self flagellation, as we had to hot foot it over and up to the other hill side for stage three within the tight transition time. Three was ‘the pedally one’, with a nasty little climb thrown in, so I was keen to make it with enough time for a quick breather before my start time. As it turned out, we didn’t want to be hanging around for too long at the start, as it was pretty exposed and the weather had turned a bit. As suspected, the heavy traffic and rain had changed the freshly cut trail a fair bit and the clay was particularly slippy in places.
The same was true of stage four, and I fell victim to the big clay chute by going into it too fast and ploughing right over the sharp unbanked corner at the bottom. Whilst I was scraping myself off the ground, I caught a glimpse of someone’s water bottle, which gave me an inkling that I might not have been the only person to fall foul of the nasty corner; something that was confirmed when I arrived at the end and encountered the owner of that bottle bearing the same muddy skid marks as myself. 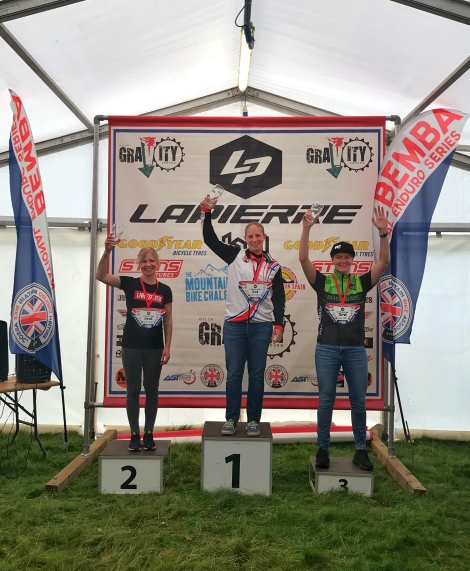 Fortunately Stage Five went much better, and I managed a clean run, to finish the race on a high. Although the day’s mishaps had cost me a place on the podium for the round, I was delighted to discover that I’d finished second in Masters for the overall series, which more than made up for it.
I entered the British National Enduro Series to challenge myself by racing at a higher level, at some venues that were new to me, and against some fresh competition, and it delivered on all those fronts. It was great to tap into each of the country’s major enduro series’, taking on their toughest rounds, and with venues spread across the UK, from the  Scottish Highlands to Exmoor, the riding was extremely varied.
With the calendar for next year released already, it looks like we’ve got some more great venues lined up, and I can’t wait to get racing again!
For more pictures, videos and updates follow Girl with a Singletrack Mind on Facebook, Twitter, Instagram, and Strava.