The timing was perfect. Just as we pushed our bikes the final few metres to the summit, the sun burst over the horizon, flooding the frozen mountainscape with an intense orange glow. To the north, a pink band hugged the Scottish coast, fading gradually into the pale blue expanse of the Solway Firth, and in every other direction stretched endless peaks silhouetted against the beam of the rising sun.

The view was breathtaking, however sub zero temperatures meant we didn’t want to hang around for long. Besides, we still had a lot of ground to cover before the sun dipped back below those peaks. It was nigh on the shortest day of the year, yet we’d just embarked on an ambitious challenge, to ride from the north to south Lake District in a day, over some of the region’s toughest terrain. 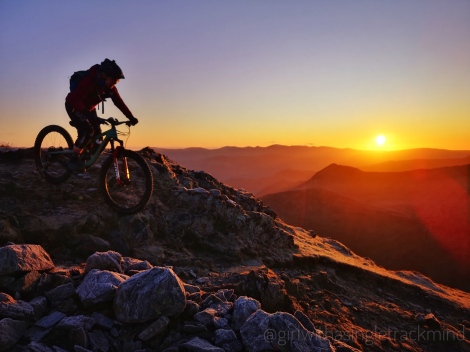 The adventure had started at 6.30am in a pitch black Whinlatter forest, which, other than our crew of five, was completely deserted. With bitingly cold air impeding circulation, and a summit to reach before sunrise, there was unusually little faff, and in no time at all we were spinning up the forest’s familiar singletrack climb by the light of the stars, and our helmet torches.

By the time we emerged from the trees onto the open mountainside, the sun had started to alert us to its imminent arrival by spilling a thin layer of neon amber over the horizon. As tempting as it was to stand and watch the show from there, we wanted front row seats in the gods, so turned our backs and continued the long push to the top. Knowing what was unfolding behind us, it was impossible not to sneak the odd peek, and each time I did, the glow had crept further upwards, dissipating gradually to cast more and more light over the slumbering peaks. 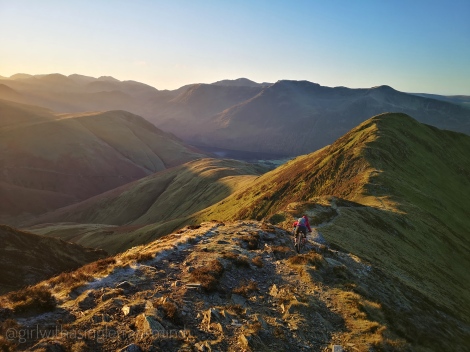 After pushing and carrying our bikes to the summit, I was feeling pretty warm, but the thick layer of frost that clung to every stationary surface suggested that it was anything but. A slightly more concerning indication was the fact that my dropper post appeared to have stopped working, which was far from ideal for the first descent of a very long day. Fortunately it wasn’t too technical a trail, so I was able to put up with it until we got to the bottom, by which time it had started to behave a bit better.

By now, the sun had risen entirely above the horizon, and was casting a golden hue over the landscape, lighting up the delicate shards of ice that had formed intricate patterns along the side of the trail. As we pedalled our way towards the next summit, we encountered sleepy looking sheep that seemed surprised to have human company at that hour, and it would, indeed, be quite some time before we’d meet anyone else on the route. 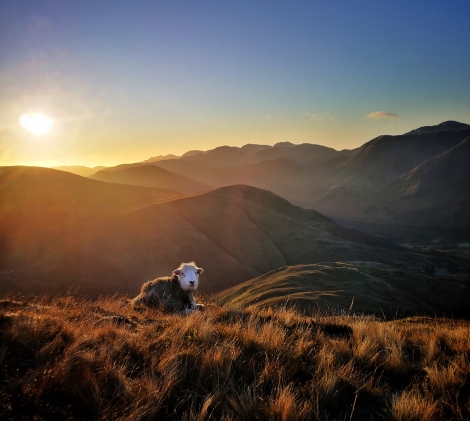 After another tough climb, we paused to take in the views over a perfectly still Buttermere bathed in the morning light, and looking every bit as smooth and golden as its name would suggest.

Our next descent was an awesome, and in places, technical ridge line to the bottom of the next valley, which was made all the more difficult by the blinding low light that made it extremely difficult to make out the rocky outcrops and hidden ice patches.

From there we had to channel our inner roadies for a long slog to the top of the pass, propelled by the promise of coffee and cake when we got there.

Although it felt like the middle of the day to us, the café at Honister Slate Mine had only just opened, and the staff were probably a bit overwhelmed by the appetites of five ravenous mountain bikers who’d already scaled several Wainwrights before breakfast. 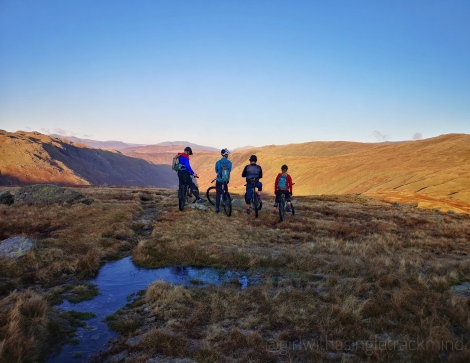 Energy levels and body temperatures restored, we set off on the next leg of our journey. Another steep climb took us back onto the tops where we were able to enjoy yet more stunning views, and without a cloud in the sky we could see for miles. We kept climbing at a steady pace until eventually we found ourselves up close and personal with some of the area’s highest peaks.

By this point we were ready for another big descent, which was exactly what lay in wait. Big, steep and loose, to be precise. The top section was less of a trail, and more a thin line etched into the vast scree field; a suggestion of where you might want to try to steer your bike, if gravity doesn’t have other ideas. 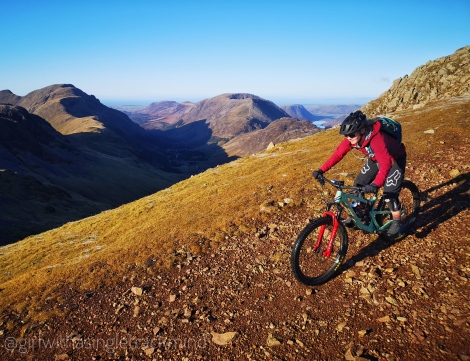 Clinging on, with brake levers pulled to the bars, I slid my way down, resigned to the fact that even the best brakes in the world are of limited use when the terrain you’re riding is moving underneath you too. Eventually we hit some semblance of a trail, although it was actually more of a staircase, and equally hard work. By the time we arrived at the bottom, my arms were ready to give way, but we were all buzzing from such an epic descent.

In need of some sustenance, we perched by the tarn for a bite to eat before continuing on the next leg. Another short climb took us to the infamous stretcher box, which marked the half way point of our journey. Uncertain as to whether this marked significant progress, or lack thereof, we gave it a cursory acknowledgement before carrying on. 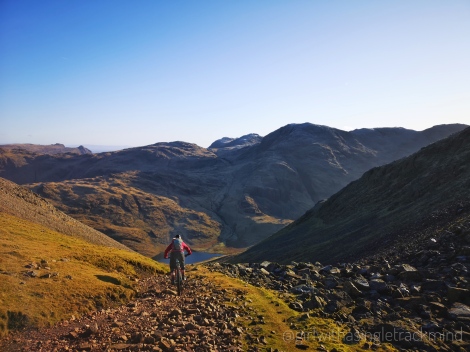 By now, it was early afternoon, and despite the fact that we’d had uninterrupted sunshine since dawn, the ground was still frozen, which was actually a blessing, as much of the terrain we were riding would ordinarily have been extremely boggy at this time of year. As we neared the top of our final big descent, we were greeted with stunning views of the Langdales, highlighted beautifully by the low winter sun.

I’d ridden the descent from Stake Pass into the Langdale valley many times, but never had it felt like such hard work. Five big climbs, three mega descents, plus everything in between, was starting to take its toll, and my upper body, in particular, was starting to feel pretty fatigued. However, determined to reap the benefits of all that climbing, I dug deep and clung on as my bike bounced down the rocky steps, managing to find the energy to steer it round the tight corners, and hop over the savage drainage ditches. 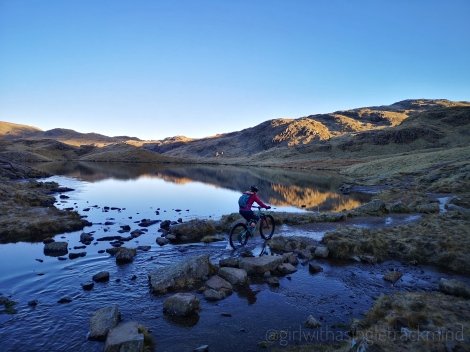 It might’ve been a bumpy ride, but at least we’d had gravity to assist, which was more than could be said for the next stage of our journey. Now it was time for the legs to take over with a long pedal to Ambleside along an undulating bridleway, with the aim of making it to Chesters for more sustenance, before it closed.

Forget carrots; it’s amazing how much energy you can muster from nowhere when you’ve got some of the area’s best coffee and cakes dangling from a proverbial stick. Fortunately we made it in time, as I’m not sure I would’ve made it the rest of the way without those well-needed calories.

By the time we’d emptied Chesters of its remaining baked goods, it was dark outside, so we dug the lights back out and set off on the final leg of our journey. 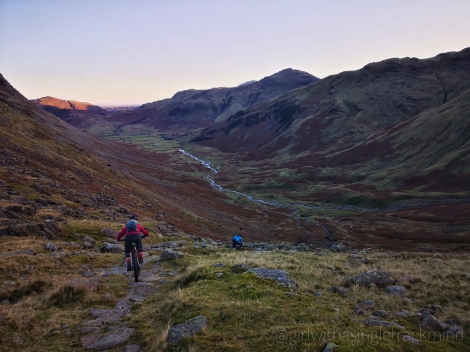 Earlier in the day, we’d had grand plans of incorporating more elevation on the southern leg of our expedition, but had long since altered our route to a slightly less ambitious version, which would avoid the risk of us being air lifted off High Street in the early hours of the morning.

After negotiating our way through a gridlocked Ambleside, we began the steep road climb up to a more tranquil Troutbeck. Despite having done this climb countless times on my daily commute, after more than 13 hours, 60 km, and 2000m climbing, it felt quite a struggle. A short, sharp blast took us down to Limefit Park, from where we embarked on our final climb up to Dubbs reservoir, feeling the lactic acid building with each pedal stroke. However, we were now on the home stretch and I could practically taste the beer that awaited in Staveley. With that as an incentive, I was able to summon the energy to push to the top, from where it was a nice straightforward cruise back to Ings. 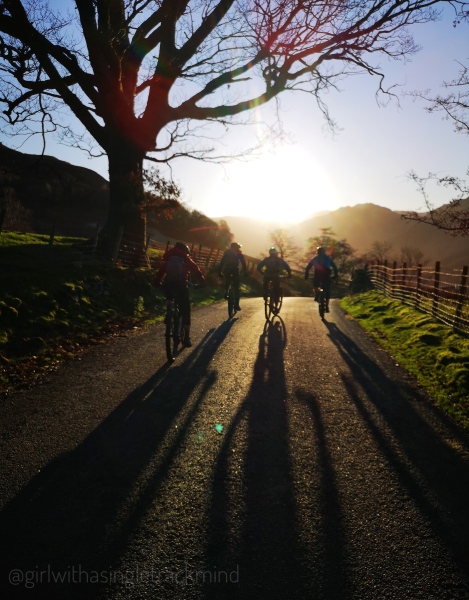 By the time we arrived back to where we’d ditched one of the cars 14 hours previously, the car park was as dark and empty as it was when we’d left it, and just as cold. Any mud that was clinging to our bikes had now frozen solid, which was the excuse we needed to bundle them straight into the car, and retreat to the nice, warm pub before our bodies froze too.

The beer tasted every bit as good as I’d imagined whilst slogging up that final climb, and the accompanying chips were devoured within minutes. In between the ravenous rehydration and calorie replacement, we reflected on what an epic day it had been, and it wasn’t long before the conversation turned to the next big adventure. West to East, perhaps?

One response to “The Lakes in a Day”