Roxy Lo doesn’t believe in female specific bikes, and as the designer of Ibis Cycles’ iconic carbon frames, her opinion holds quite a lot of weight. This isn’t to say that she doesn’t place an importance on designing mountain bikes that are suitable for women – far from it. As a 5ft tall, slightly built woman, she understands, more than anyone, the difficulty of finding mountain bikes and gear to fit. It’s the shrinking, pinking and debasing of bikes for women that she objects to. 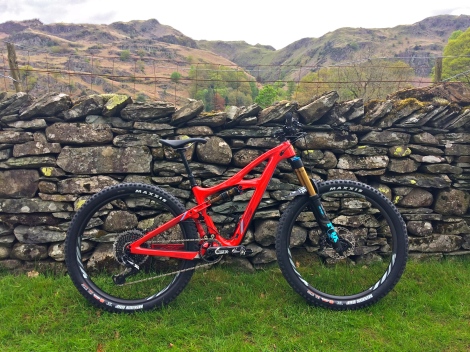 As a similarly diminutive female myself, I can fully relate to her plight. And in such a male dominated industry, it’s refreshing to learn that there’s someone out there who not only gets it, but has the ability to influence. Most female mountain bikers that I encounter don’t necessarily feel the need for female specific bikes for the sake of it, but they do want to know that they are being considered in the development of bikes and kit, and are adequately catered for. For bigger women, it’s not so much of an issue, but for smaller women, there’s generally not much choice out there.

My first ever full sus bike was an old Ibis Mojo SL, and I loved it. However, as I progressed as a rider, I began to find the older geometry a bit limiting, so opted for a slacker and longer travel Santa Cruz Bronson for my next bike. I loved my Bronson, but have always had a soft spot for Ibis, so when the opportunity arose to test ride their most recent trail bike, the ‘Mojo 3’, I jumped at the chance.

Since it’s inception in 2005 the Mojo has been central to Ibis’ range of bikes and is credited with being the “bike the brand was built on”. It was one of the first full suspension mountain bike frames to be made from carbon, and Ibis not only wanted them be super strong, but also aesthetically pleasing. The beautiful frame that Roxy designed back then has changed very little, but the geometry has been tweaked over the years, and the Mojo 3 is now a very different bike to the more XC suited machine that first opened my eyes to the world of bouncy bikes.

One thing that hasn’t changed is the DW link suspension, which has featured on the Mojo since the beginning, and is widely regarded as being one of the best linkage designs out there.

The latest version of Ibis’ iconic trail bike boasts the tag line “Go anywhere, do anything”, and with 140mm travel up front, 130mm rear, and a 66.8 degree head tube angle, it certainly sounds like the perfect all-rounder on paper. All models come specced with a Fox Float 34 fork and Fox Float DPS Factory shock, but it’s possible to upgrade to the ‘Werx’ spec on any of the builds, which gets you a Factory fork and dropper post, as well as carbon wheels. Build kit options range from Sram NX Eagle to X01 Eagle in the UK, with Ibis alloy/carbon wheels and bars, Ibis/Thomson Elite stem and KS Lev/Fox Transfer dropper post, depending on the level of spec. It’s only available with 27.5 wheels, but there is plenty of clearance for plus size tyres. 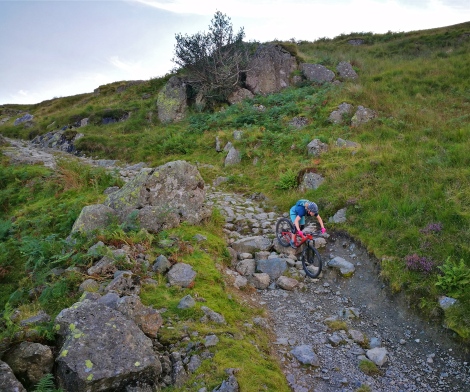 The lovely people at 2 Pure, Ibis’ UK distributor, kindly lent me a small Mojo 3 for a couple of weeks, during which time I took it on a number of different rides to test it on some varying Lake District terrain.

First up was one of my favourite post-work rides taking in Garburn Pass and ‘The Three Rivers’. The ride starts with a big climb up to the top of Garburn Pass, which is steep, rocky and relentless. My first impression of the Mojo 3 was how effortlessly it climbs. Light and nimble, it skipped up the rocky technical sections with ease, and the massive Eagle cassette allowed me to keep the cranks turning on the steep sections, where I’d often find myself grinding to a halt. In fact, for the first time, I cleaned the entire climb without dabbing, which was reason enough to fall in love with this bike!

However, climbing like a dream was just a bonus. The real test was how it would perform on the loose rocky descent. Garburn Pass is an extreme example of the kind of loose, rocky trails that are so common in the Lakes, so I figured that if it could get down that, it’d fare well on most of my favourite Lake District descents. It’s generally a case of hold on and hope for the best, but the Mojo handled it ably, and would no doubt have coped even better if I hadn’t forgotten to unlock the shock!

Having passed the buckaroo test, I decided it was probably a good idea to test it on some trails where I was able to assess its performance beyond my ability to hang on for dear life, and with all of its bouncy bits engaged. With this in mind, I took it to Grizedale to see how it fared on the rocky bridleways and forest trails. Once again, it climbed like a dream, flying up fire roads and skipping over more technical terrain with ease. However, the real fun began when I pointed it downhill. Ensuring that the shock was unlocked this time, I took it down a variety of different trails, ranging from rough and rocky bridleways to tight, rooty singletrack through the trees. As before, it bounced effortlessly over rocks, felt super responsive on tight bends, and there was easily enough travel in the 140mm fork and 130mm shock to make light work of some decent sized drops. It was also really playful, making it easy to get air off the smallest hits, but despite its liveliness, I felt totally in control rather than being a passenger.

The only thing I hadn’t had a chance to test it on was some really steep and techy stuff, so I decided to take it to Innerleithen to put it through its paces on some of my favourite Golfie descents. For me, this was the ultimate test, and if it nailed these trails, I’d be sold. However I had a niggling feeling that it might be out of its depth.

I’m delighted to say I was wrong, and the Mojo 3 felt great on such classics as 3G, Waterworld and Liver Damage; holding it together on the steeps and making light work of the mud and roots.

Ibis tout the Mojo 3 as being their “most versatile trail bike ever”, and it really does live up to the claim. I race enduro, but I also do a lot of big mountain adventures, which involve some big old climbs. So while I do want a bike that handles well on steep, techy descents, it’s equally important to have something that climbs well, and is easy to sling on my shoulders for those necessary hike-a-bikes.

With the Mojo 3 ticking all these boxes, within a couple of weeks of handing back the demo bike, I’d ordered my own. Admittedly, I did change the spec slightly, most notably switching the 140mm travel Fox 34 fork for a 150mm Fox 36, which made it even more capable for the type of riding that I do.

Ibis also offer what they call the “Roxy tune”, where the shock can be set up with lower pressures for lighter riders, which is something that particularly appealed to me, but unfortunately i discovered that it’s only available in the US.

I’ve now had my Mojo 3 for around ten months, and still love it as much as I did when I first got it, if not more so. It’s served me well through a season of enduro racing; accompanied me ably on some of the Lake District’s toughest routes; tackled some tough tech in Spain; and even carried me capably down the World Cup track at Fort William several times.

If you’re after an all-round mountain bike that you can carry up and throw down the toughest trails, or simply pedal for miles, the Ibis Mojo 3 should be a strong contender. And guys, please don’t be put off by its suitability for a small woman, as I know plenty of big, burly blokes who love this bike just as much as I do.

With frames coming in at £3000 and full builds ranging from £4249 to £7799, it’s not one for those on a tight budget, but rather those who place an importance on meticulous design, quality components, and the performance that they afford the overall ride.

Roxy designed the Mojo to be ridden by people of all shapes and sizes, regardless of their sex. And after many years of designing some of the most desirable bikes in the world, she knows her shit.