One of the (many) great things about mountain biking is that you can do it all year round, whatever the weather. As long as you’ve got the right gear, and inclination, there’s nothing to stop you shredding as hard throughout the winter months as you do during the summer. Over the past couple of years I’ve done a fair bit of winter riding and quite like getting a bit muddy, but other than a few frosty rides, I was yet to experience ‘proper’ winter conditions. I do, however, draw the line at storms, and as that’s what we’d been experiencing for the past week or so, I was champing at the bit to get out on the bike. When the turbulent weather finally subsided last Friday I was desperate to hit the trails, so headed to Glentress.

It was forecast to be bright and sunny but very cold and still pretty windy. However, the fact that the winds weren’t gale force and accompanied by driving rain was a godsend. Stepping out of the car at Glentress Peel it instantly felt colder than any other time I’d been there and my hands were totally numb before I was even ready to leave. There was no evidence of snow or ice but the air was freezing. As always, the climb warmed me up, although only just, and rather than being the usual sweaty mess, I was a snotty mess instead. The hands took somewhat longer to warm up, which made gear changes particularly painful, but fortunately they were fully functional again before I needed them on the brakes for the downhill sections!

The first signs of ice appeared in the troughs of the jumps section like some kind of malicious booby trap. Fortunately I managed to dodge them but decided that it probably wasn’t the best day to work on my jumping technique. As I continued up the fire road it got increasingly snowy and icy, and by the time I got to the start of the climb up to Spooky Wood, the road was completely covered in snow and scored with tyre tracks of solid ice. 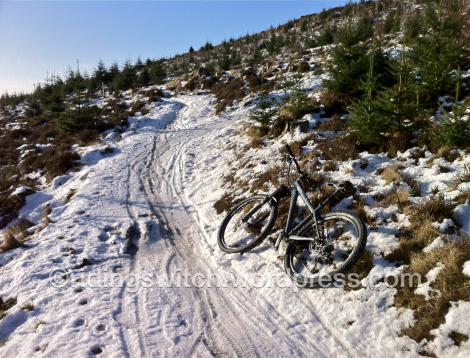 The climb up to Spooky Wood was pretty sketchy and although I did my best to avoid any existing tracks, there were some sections where the entire width of trail was sheet ice. At one point my bike skidded out from under me and I had to walk for a bit before I could actually get enough traction to get going again. The view from the top was even more stunning than usual but the prospect of what lay ahead on the descent took the edge off it somewhat.

Fortunately there were three young lads about to set off so I quizzed them to see if they’d already been down at all. They hadn’t, and seemed just as apprehensive about it as me. Chatting to them I learned that they were brothers, one being a semi pro downhill rider and another who was mountain biking for the first time. Talk about a baptism of fire! Or should that be ice? And I thought my first time was pretty full on…

When Morgan, the semi pro, skidded out on the first drop off and then again on the first berm, it didn’t bode well and I vowed to take it easy. I set off tentatively, trying to avoid the icy bits, but it was impossible not to skid in places. The flatter bermed section was easier to negotiate and the snow felt a bit more grippy so I gradually gained confidence and increased my pace. Next thing I knew my bike skidded out and I landed with a thud on the hard ice, bike on top on me. I’m no stranger to taking a tumble but that was a sore one. Fortunately it was just a bit of soft tissue damage though so I picked myself up sheepishly, urging myself, once again, to take it easy.

It took about ten minutes to get down Spooky Wood, a section that I normally do is around three, and when we got to the bottom Morgan made the executive decision to give Super G a miss, opting instead to take some “secret trails” through the trees which he didn’t think would be as icy. Not relishing the thought of carrying on by myself I asked if I could tag along and fortunately they didn’t seem to mind!

The trail Morgan picked was infinitely better and we were actually able to blast along at a decent pace for the rest of the descent. It was actually even pretty muddy lower down, which was much more like the Glentress I know and love! When I got home I discovered that Glentress had issued warnings about the treacherous conditions on their Facebook page, and while it was a bit late for me, it was reassuring to know that my first experience of true winter mountain biking was possibly a bit more extreme than usual.

Despite still sporting some pretty impressive bruises, I headed back up a couple of days later and experienced winter riding at its absolute best. However, as I’ve already banged on for long enough here already, I’ll write about that in a separate post…

This article was originally posted on my other blog, Riding Switch.

2 responses to “Mountain biking on ice”

Quick lap with the pup, then a couple without! 👌
Little spin round the forest with my wee pal! 🚴🏼‍♀️🐕
Chasing the sun 🌅
Great to get out for a razz this arvo 👌
Making the most of a break in the weather! 👌
Dropping into 2022! 🤟
Hogmanay with the fam! 🔥
Back in the homeland for Hogmanay! 🏴󠁧󠁢󠁳󠁣󠁴󠁿🎉
Follow Girl with a Singletrack Mind on WordPress.com