Back in September Red Bull held the first ever all female Foxhunt mountain biking race at the Pentland hills in Edinburgh. The event attracted 117 women from throughout the UK and even as far afield as the Netherlands, to chase the fox, Rachel Atherton down Allermuir hill.

Sadly I wasn’t around to participate in the event and was gutted to miss out, not only because it looked like an awesome event, but also because it was a rare opportunity to meet and ride with other female mountain bikers en masse, including the legend that is Rachel Atherton.

Like many other girls into mountain biking, I usually ride with guys, and while I really enjoy that, I love to ride with other girls of a similar standard when I get the chance, which isn’t very often.

So, when a Facebook group entitled “Foxunt Reunion” appeared on my Facebook page as a “suggested group” I thought I’d check it out. Although I hadn’t been at the Foxhunt, it was clear from the posts that it was open to any girl who wanted to hook up with other female mountain bikers, so I joined.

The reunion was instigated and arranged by Sarah, who’d enjoyed the Foxhunt so much that she wanted to harness the buzz it had created and keep everyone connected. It’s a sentiment that was obviously shared by a great many of the girls who took part, as well as others like myself who’d wished they had, as there were loads of people interested in getting together for a weekend of “bikes, beers and banter”. 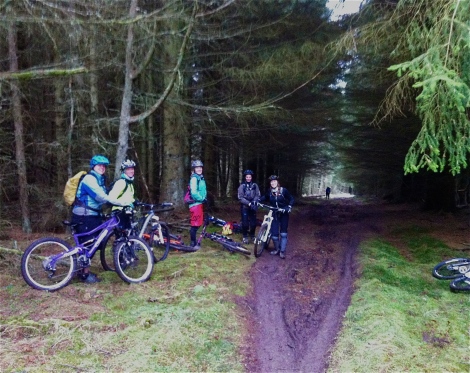 It took place at Innerleithen on the weekend of 21-22 February with girls coming from all over the country to take part. Sarah had lined up top downhill rider and mountain biking coach Jess Stone to run two separate coaching sessions over the weekend for those who were keen to hone their skills.

An intermediate coaching session was held on Saturday, and anyone who wasn’t booked on to that headed off together to shred the awesome trails of Innerleithen. That evening, those who were staying locally met for beer and pizza in town to catch up and carb load ahead of another day on the trails.

I was unable to make it on Saturday but managed to get a place on the advanced coaching session on the Sunday as one of the other girls had to drop out (thanks again, Clare).

Unfortunately the sunshine that they’d been blessed with the day before didn’t fancy joining us again and sent along some rain clouds and sub zero temperatures in its place. However, a bit of rain wasn’t going to dampen our spirits and we set off, knowing that we’d warm up pretty quickly when we started that climb. On the way up I got chatting to the others, and it was great to meet other girls who’re as passionate about mountain biking as I am, even if the conversation was punctuated by the odd gasp for breath.

We also stopped to work on a tricky step up section, which is something I always have problems with. As it turned out, I wasn’t alone, and it was great to get some tips and reassurance that I very nearly had it, rather than being told by my other half that he can’t understand why I always mess it up!

Brakeless supermanning through the mud!

Jess had planned to take us up to the top of the Alistair Lees trail and coach us on different sections of the descent. However, by the time we got to the fire road intersection half way up, the rain had turned to snow, so she decided it’d be better to just focus on the lower section. On the way down we stopped to get pointers and practice various different skills including picking lines, riding rooty sections, ruts, deep mud and steeps. Highlights included brakeless supermanning through deep mud and taking on one of Innerleithen’s steepest sections of trail with a human safety net to ensure we didn’t go flying off!

The coaching was awesome and every single one of us left feeling that we could do something, or indeed several things, that we didn’t think we were able to before. You see, that can be the problem with us girls. It’s not necessarily that we can’t do these things, but sometimes something in our brain holds us back, whereas guys tend to just throw themselves at it. It’s something that’s common among women, but the combination of excellent coaching and encouragement from Jess, as well as support from the other girls in the group, allowed us to realise our potential.

Later, while we were warming up in the local café and discussing what a success the weekend had been, we all agreed that while we love shredding with the guys, there’s something uniquely beneficial and enjoyable about riding with a group of girls every now and again.

It’s true that you can be pushed out of your comfort zone by riding with the guys, but invariably a concession will be made, either by you, or most likely them, because you’re a girl and therefore aren’t expected to go as hard as them. Of course, that’s not the case at all – we just go about it differently!

Warming up after an awesome coaching session!

The next day I went to Glentress so that I could put some of the things I’d learned into practice. While I was there I sessioned a section of trail that had been doing my head in for ages, and thanks to the pointers I’d had from Jess, plus a bit of self belief and determination, I finally nailed it.

Sarah had managed to get a signed shirt from Rachel Atherton that was to be presented to the girl who’d progressed most over the weekend. However, in the end it was decided that it should be presented to Sarah herself as a thanks for organising such an awesome weekend and keeping the stoke that was generated by the Foxhunt alive.

Since the reunion, the name of the Facebook group has been changed to ‘Foxy Riders United’ to welcome any girls who want to connect with other female mountain bikers, regardless of whether or not they did the Foxhunt. If that sounds like you, join the group on Facebook and come along to the next get together! Despite being a gargantuan task, Sarah has already said she’s keen to organise another one at some point, and I, for one, can’t wait!

While I’m sad summer’s coming to an end, I’m pretty happy the bracken’s finally dying back so we can see the trails again! 😅
Great to get another couple of days at the Golfie whilst visiting the fam this week. Absolutely love these trails! 🤟
Follow the yellow grit road! 💛
Another round of Golf ⛳️
Another day, another sweaty push-up! And decided today was the day to refamiliarise myself with the big lid! 😅
Absolute scorcher up at the Golfie yesterday! Way too hot for that climb! 🥵
Great few days of guiding, and now up in the motherland for a couple of days riding! 😎🤟
Mild mizzle was actually quite pleasant!
Follow Girl with a Singletrack Mind on WordPress.com