Despite having just moved south of the border, there was no way I was going to miss out on one of the biggest events in the mountain biking calendar coming to Scotland, so last weekend’s downhill mountain bike world cup event at Fort William provided the perfect excuse for a trip back to the motherland. 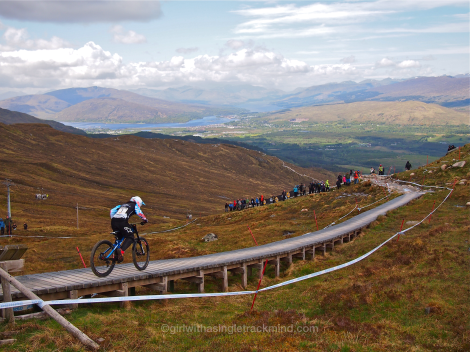 After catching up with friends and family, and shredding the home trails at Glentress, we headed up to Fort William first thing on Sunday morning. Originally we’d planned to go up on the Saturday and camp overnight, but decided not to bother when we saw the weather forecast. As it turned out, the weather was so bad that everything was cancelled on Saturday, so we didn’t miss anything. For a while it looked like it might be a repeat of the British Downhill Series event there a few weeks ago where the weather was so dire that they couldn’t run the gondola and were only able to use the lower section of the course for the race, but fortunately the weather decided to play ball on Sunday and it ended up being a really nice day. 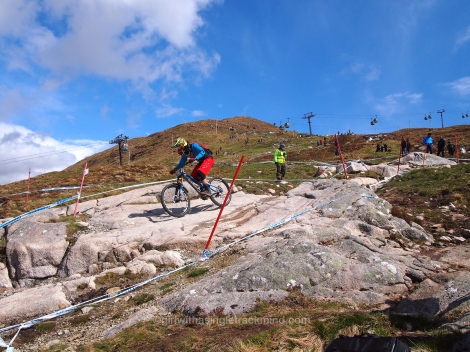 When we arrived at 9.30am, the rescheduled qualifications were already underway so after a quick wander around the stalls, mingling with the likes of Gee Atherton and Danny Hart, we set off up the mountain to check out the action on the course. We decided to leave the gondola to the riders and went up on foot so that we could check out the full course. The recent deluges had turned the area into a mud bath and it was impossible to avoid submerging your entire foot in places. Once resigned to this, you were able to focus on climbing the steep track and looking out for riders flying past, without caring about how filthy your clothes were getting.

By walking up the course, you get a proper idea of just how long and steep it is, making the speed and ease with which the riders get down seem even more impressive. Everything about it is extreme, from the massive gaps and jumps lower down to the steep rocky sections near the top. We were able to see all the riders, from close proximity, at every stage of the race and it was awesome to watch. I particularly enjoyed watching the women and it was great to see the likes of Rachel Atherton, Manon Carpenter and Tahnée Seagrave in action.

The atmosphere was also fantastic and there were loads of people cheering on the riders at every stage of the race. A group of pissed up blokes in Tetris costumes falling down the hill also provided some additional entertainment. We made it back down to the bottom in time for the end of the senior men’s race, where the atmosphere was electric, and watching them fly over those final jumps, just seconds apart, was exciting stuff. In the end it was Greg Minnaar who won the men’s elite race after a faultless run, followed by Aaron Gwin, Marcelo Gutierrez Villegas, Gee Atherton and Sam Blenkinsop in second to fifth places respectively. 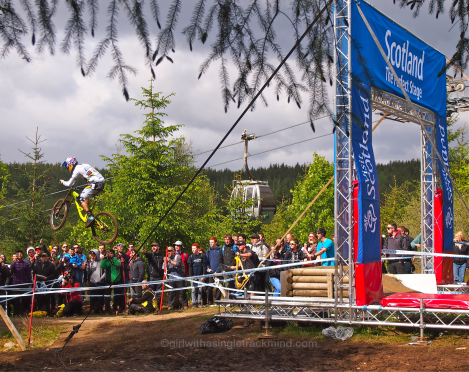 The women’s elite category was dominated by the Brits, and it was fantastic to see our girls take four out of five spots on the podium, with Rachel Atherton in first place and Tahnée Seagrave, Manon Carpenter and Katy Curd in second, fourth and fifth respectively. To be honest, I don’t know if I was more impressed by watching Rachel race, or down a whole bottle of champagne (or at least what was left of it once it had been sprayed around) on the podium, but I was stoked to get the chance to congratulate her in person, and get a cheeky fan pic!

Britain was also well represented by the juniors, with Laurie Greenland and Rona Strivens both making it onto the podium.

Although I’d normally rather be riding the trails than walking them, this is one instance where I was happy to be on the other side of the tape, leaving it to the pros. It was fantastic to watch the world’s best downhill mountain bikers smashing what’s widely considered to be one of the gnarliest courses on the circuit, and made all the sweeter by the fact that it was all going down in the beautiful Scottish Highlands, with some decent weather! It was such as good day and left me feeling properly inspired to up my game on the downhill trails – just need to get myself a downhill bike now!