When it was suggested that we head to the Lake District to ride some natural trails at the end of last week, I wasn’t convinced that it was the best choice of destination. It had only been a matter of days since scenes of devastation caused by the recent flooding had filled the news and social media, and I was well aware that some areas had been hit again more recently. However, assured by our friend who knows the area well that all was ok, we set the alarm early and headed for town of Staveley with the intention of riding a loop that takes in the Garburn Pass, which is renowned for its epic rocky descent.

Driving past swollen rivers and flooded fields you couldn’t help but feel for the locals who’ve been so badly affected by it all. Evidence of the extent of the damage was even more apparent when we started our ride. The initial climb, which is usually a relatively easy-to-ride, albeit steep and rocky track looked as though it had been ripped up by an earthquake, rendering it quite a technical ascent.

Despite having been ravaged by the floods and still pretty waterlogged in places, the trail was all still easily rideable, although the grassy sections were pretty soft and there were a few swampy areas to negotiate. Fortunately though, much of it was rocky, which was not only more interesting, but easier to ride.

Although the Met Office had forecast favourable conditions, it was clear that the weather system that had caused the flooding was still hanging around. Within fifteen minutes of setting off, we were already being subjected to a heady mix of rain, sleet and hail, although a touch of sunshine produced a lovely rainbow, which made it all seem better.

Sadly the sun’s presence was only fleeting and the weather deteriorated progressively the further we went. It wasn’t only wet, but bitterly cold, and no matter how aggressively I attacked the climbs, I just couldn’t warm up. By time we got to the point where we were due to begin our ascent of the pass, we were riding through driving precipitation at varying stages of the freezing process, and my hands were so numb I could barely feel my feet on the pedals, use the brakes or change gear. 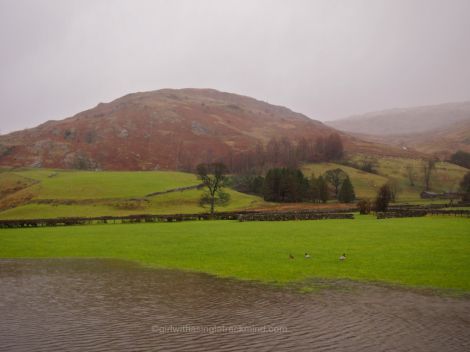 Towering above right in front of us, the pass was tantalisingly close, with the descent easily visible, but we could also see that it was covered in a thin layer of snow, which was less inviting. All soaked through and freezing cold, we decided it was probably best to abort the ride and take the most direct route back to Staveley.

Despite pedaling back as fast as I could in a desperate attempt to warm up and get some blood back to my extremities, by the time we arrived back at the car, my fingers and toes were screaming with pain and I couldn’t wait to get my wet gear off and warm up. This was frustratingly difficult with frozen digits but before long we were huddled up in Wilf’s café with a bowl of delicious hot soup.

It was disappointing not to be able to ride the Garburn Pass, but it was an enjoyable ride all the same, until hypothermia nearly took hold. I can’t wait to go back and try it again, although we might wait until the weather warms up a bit, especially as the area has since received heavy snowfall. After all the floods, it’s the last thing the people of the Lake District need, and I really hope it hasn’t caused any further damage.

If you’re hardier, or better equipped than us, there’s no reason not to head to the Lake District mountain biking just now. Some of the trails may have changed, but as the positive-minded guy in the local bike shop pointed out, that’s not necessarily a bad thing.

One response to “Garburn Pass, fail”