“The trails could do with a bit of rain”, said Dan after we’d blasted down the bone dry and extremely loose trails in Les Gets, being extra cautious not to wash out on the berms. It was a perfect example of being careful what you wish for, as low and behold, after two scorching hot days, the heavens opened and it rained for three days. Although the showers were intermittent and interspersed with periods of sunshine, when it rained, it rained hard, transforming the trails into mud chutes. 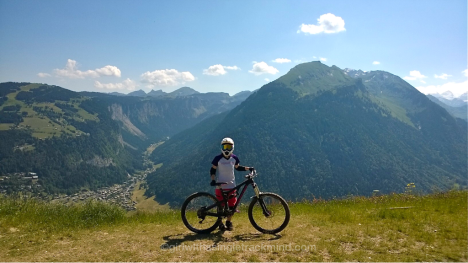 Undeterred by the conditions, we headed out to slide around in the mud, convincing ourselves that, if nothing else, it’d be good practice. As it turned out, it was great fun, and not as difficult as I’d feared it might be. When we were there last year we’d had one wet day, on which we just stuck to the blue runs, but this time we rode pretty much everything that we’d ridden in the dry, with the exception of the black run down from the top of the Super Morzine gondola, which is very steep and rooty, and tricky enough in the dry! 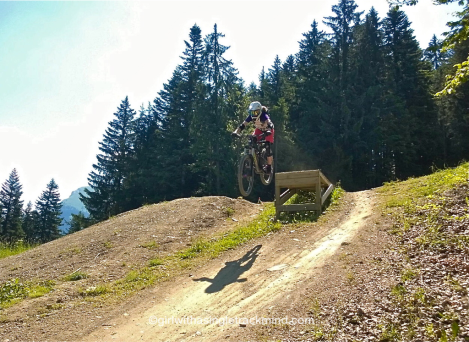 On the other hand, the black run down from Le Pleney held together pretty well in the wet and was surprisingly easy to ride. It was Le Pleney red that was more of a challenge, with deep mud and super slippy, steep berms. It took a while to get the confidence to steer into the berms and let myself slide into the quagmire, but once I had, it was great fun, and left me wanting to go back for more.

However, in the 20 minutes it must have taken to get back up to the top, the mud had completely changed in consistency to that thick, claggy stuff that stops your wheels from turning and adds an extra few kilos in weight to your bike, and being unable to either ride or carry my bike took the fun out of it somewhat.

Eventually the rain eased off and the trails gradually dried out, becoming grippier in the process. This was great on the berms, but it was still really hard work trying to get much air on the tabletops.

By our penultimate day, the trails were riding fast again, although one of my favourites, Le Pleney black had been ravaged a bit and wasn’t riding quite as well as it was before. Over on the Super Morzine side I was disappointed to discover that a couple of gaps that I had my eye on had been closed, but there was still lots of fun to be had, and less potential for breaking myself. And after Dan talked me out of hitting a road gap that I’d set my sights on, I had to satisfy my urge for airtime with some nice big tabletops.

Clearly I wasn’t trying hard enough as, other than a few skids in the mud, I didn’t have any crashes over the course of the week, which is almost unheard of for me. That’s if you don’t count trying to get back on my bike after a few après beers and promptly falling off again, resulting in a scraped forearm and elbow. Note to self: do not remove body armour until the bike has been safely stowed away for the night, particularly if the Mutzig is flowing.

As always, a week was way too short and before we knew it, we’d begun the long drive back to Blighty. Next year will definitely be a two-week trip, at the very least, and as we’ve done Morzine twice on bikes now, in addition to many more times on snowboards, we’ll probably head somewhere else, or do a bit of a tour. I do love Morzine though. With the whole of the Portes du Soleil within easy reach, a huge variety of fantastic bike park and singletrack trails, and an awesome town with loads going on, it’s an excellent destination for a mountain biking holiday, whatever the weather.