One that didn’t really go according to plan…

If there’s one thing I’ve learned about winter riding, it’s that you have to be prepared to adapt your plans, expectations and riding style according to the, generally unfavourable, conditions. Having already had to change last week’s plans because of the weather, as my next day off drew closer, it looked like the same thing was going to happen again.

With a rare two days off in a row, we’d planned to head up to the Lakes to do a couple of decent rides. However, on checking the weather before we left, it looked like the weather was going to be a bit grim for the first day, with the Peak District looking like a much better option. As we were keen to do some more riding in that area anyway, we decided to head there instead, then travel up to the Lakes the following day. 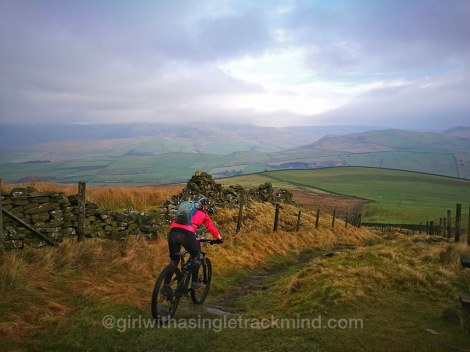 With time pushing on, and daylight hours at a premium, we decided to head somewhere within easy reach, so opted for what seemed like an easily do-able 25km loop from Hayfield.

We started by heading west along a flat track for about 1.5 kilometres, then cut off onto a country road that climbed up past a quarry and couple of farms, before joining a bridleway that took us up onto the moors. After a bit of climbing, we traversed for a while before a fairly short but sweet descent to a road.

After crossing the road we rejoined the bridleway for another climb, and before long joined up with a stretch of trail that we’d ridden a few weeks previously when doing a loop from Edale, taking in Mam Tor and Jacob’s Ladder. It wasn’t long before we were descending again, and at the bottom took a sharp right turn to begin the long slog up to the top of Jacob’s Ladder.

I’m not normally averse to a challenging climb, and actually quite enjoy that part of a ride, but this one is particularly tedious, and I enjoyed it no more than I did last time. It’s not so much the gradient that’s a problem, but rather the surface of loose stone, which not only makes it really difficult to pedal up, but also quite uncomfortable to walk on, if you find yourself having to push up some of it!

Before getting to the final part of the climb, which was actually the bit I preferred last time, we turned off to follow another bridleway that skirted Kinderlow End before climbing up Broad Clough. Although I was glad to get off the loose rock track, it did seem a shame to get so close to the top of Jacob’s Ladder without riding the awesome descent, but in the interests of exploring new trails and practicing my navigation skills, we resisted the urge. Unfortunately the muddy, rutted trail that we’d turned on to was almost more difficult to ride than the previous one, and the grinding of mud-caked gears provided a woefully fitting soundtrack to the onerous ascent.

Whilst no Jacob’s Ladder, the descent from the top was a fast blast down the grassy, muddy, and rutted hillside. I was having great fun, until I took a corner too fast, slipped on the mud, and went down hard. I’ve hit my head many, many times, riding bikes and snowboards (explains a lot, I know), but never before have I heard such a horrible noise on impact, as the loud boiiing of my helmet hitting what I guess must’ve been a rock.

It was one of those crashes where it takes a while to compose yourself and figure out just how badly hurt you are. Most of the left hand side of my body hurt – I always seem to crash to the left – and I could feel l’d taken the skin off my elbow/forearm, again, but it was my shoulder that was troubling me the most. I also felt sick and a bit dizzy, but after a few deep breaths, managed to peel my mud-covered body off the ground.

Although pretty sore and shaken, I decided I’d be ok to carry on, so after swallowing a couple of ibuprofen, we set off again. I was relieved to find that my mountain biking faculties hadn’t been compromised too much, but I rode the rest of that descent pretty tentatively, particularly the steep-ish, rocky final stretch down to the Kinder reservoir.

The climb from there up onto Middle Moor was pretty steep, and it was when I had to resort to pushing up that I realised I hadn’t got off as lightly with my shoulder as I thought. By the time we got to the top, time was pushing on, and I started to accept that we may have to abort the planned ride and just head back to Hayfield by the most direct route possible. Scanning the map, we saw there was a bridleway that descended straight down to Hayfield rather than continuing along Middle Moor, so we decided to give that a go in the hope that it might at least give us a decent final descent.

After following it for about a kilometre, it became apparent that the descent probably wasn’t going to be much cop, so we decided to retrace our steps and continue over and down Middle Moor as originally planned, then follow the road back to Hayfield instead of continuing the rest of the loop. It was a much better option, taking us along some nice rocky singletrack through the heather, and finishing with a fun descent to meet the road back to Hayfield.

Needless to say, I was unable to ride the next day in the Lakes, and just to rub salt in the wounds, it turned out to be a glorious day. This time I couldn’t blame the winter weather for hindering my riding plans, although I’m pretty sure it wouldn’t have happened on a dry, dusty trail in June. It was a painful reminder that of the need to adapt my riding style to suit the conditions.

Although the ride didn’t exactly go according to plan, it was a good route that, for the most part, made a decent winter ride. However, I definitely preferred the loop that takes in Jacob’s Ladder, Mam Tor and Rushop Edge, which offers by far better descents. And, as they’re predominantly rocky, they’re a bit less slippy than the grassy hillside that claimed me!