Ever since riding Walna Scar in the snow a few months ago, I’ve been desperate to return and ride that awesome descent in slightly less challenging conditions. And after riding a different loop around Dunnerdale Fells that covered some of the same ground, plus another great descent to Seathwaite, it struck me that a longer ride incorporating both descents would make a pretty epic route.

After a spate of days off that coincided with atrocious weather, we finally got a day where it wouldn’t be stupid to embark on what we knew would be a fairly tough day out on the bike.

We decided to start in Torver in order to get the killer 20% gradient road climb out of the way first, and knew that we could end our final descent there too. With fresh legs, the initial climb didn’t seem too bad, and before we knew it, we were blasting down the muddy singletrack trails in Broughton Moor forest, then climbing up to Dunnerdale Fells.

At Stephenson Ground we followed the bridleway left towards Seathwaite and the Dunnerdale valley. As with last time we rode it, the trail was pretty boggy, and we also had to contend with a pretty strong head wind that was increasing in ferocity the higher we went. By the time we got to the top of the descent to Seathwaite, it was so gusty that our hopes of reliving the epic descent we’d enjoyed last time were diminishing rapidly. Fortunately, as soon as we turned the bend and dropped onto the main rocky section, we were completely sheltered from the wind and able to blast down, with only unpredictable boulders and errant sheep to worry about.

At the bottom we followed the road for a few kilometres, and instead of turning onto the bridleway towards Birks Wood, we continued up the incredibly steep road to cut out what we’d decided had been a bit of a pointless detour last time. It didn’t take long for us to start to think otherwise, and by the time we got half way up, we were starting to wish we’d just taken the long way round, not that it had been all plain sailing either.

Eventually we arrived at the top where we turned off onto the fells again and followed the bridleway back to Stephenson Ground. Last time we rode this section we were battling heavy wind and rain, which prevented us from fully appreciating what an awesome stretch of undulating singletrack it is. 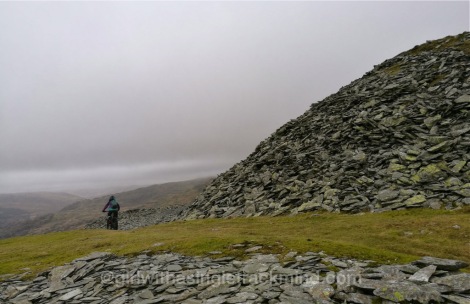 On arriving back at Stephenson Ground, instead of retracing our tracks back down the road to Broughton Moor, we continued on the bridleway towards Walna Scar. Just like last time we were there, it was very wet on the way up, particularly on the plateau where, at one point I sank calf deep in the mud. It was definitely easier than trying to negotiate it in deep snow though, without so much as a tyre mark to follow.

Something that was no less difficult this time round was the punishing push up the Walna Scar Road, which was almost as tough in strong winds as it was in deep snow. However, on this occasion we did at least know that it’d be worth it for the epic descent that lay ahead.

I’d really enjoyed the descent from Walna Scar when it was covered in snow, and it was even better without. Not only were we able to approach it less cautiously, but there was no coating to smooth out the rocky surface. After awesome twisty top section, instead of following the main track all the way to Coniston, we turned off onto the bridleway back to Torver, which turned out to be a much better descent than the slightly underwhelming alternative final stretch.

It was a great end to a fantastic ride that I’d highly recommend. While you definitely have to earn your down time, the two long, technical descents are worth every second of uphill slog, and there’s plenty of nice flowing singletrack in between. Although only 27km long, the 1,150 metres elevation made it feel like a big ride, and we were definitely feeling it by the time we arrived back in Torver. Fortunately we’d strategically parked right next to the local pub so were able to replace those lost electrolytes and calories with beer and a massive basket of chips, like the true athletes we are.

Fancy riding it yourself? Head over to Singletrack Minds to book a day out riding some of the Lake District’s finest mountain bike trails with an experienced local guide.