As I wiped away the large blob of cold wet mud that had landed dangerously close to my mouth, my fears that it was, in fact, an altogether more unpleasant substance were confirmed. “Yep, it’s cow shit”, I announced to my ride buddies, who were also covered from head to toe in bovine excrement. Not that anyone seemed particularly fazed. After a day spent slipping and sliding around Grizedale forest in the rain, practicing for the final round of this year’s PMBA Enduro Series, a bit of cow shit was the least of our worries. Recent heavy rain and flooding in the area had taken its toll on the trails, making the six, already tough race stages even more challenging. Some had become water chutes, others muddy bogs, and with over 350 riders skidding down again the next day, they were only going to get worse.

However, the first challenge was getting everything clean and dry again for the next day, which felt like a particularly thankless task, given that it would be covered in mud again within a matter of hours.The next morning it was warm and sunny, and, although too late to make any difference to the trails, it would certainly make riding conditions much more pleasant, and spirits were high as we gathered in the race village for our 10.25am start.The 26km course started by taking us straight up ‘Boulder Alley’, the steep rocky bridleway opposite the visitor centre, and over towards Satterthwaite for stages 1 and 2. If the arduous push up hadn’t been enough of a rude awakening, the wet and wild descent provided by Stage 1 was enough to blast away any residual cobwebs. The stage, known as ‘Deerhunter’ had been used in a couple of recent PMBA races, including the National Championships, and is one of my favourites. After an awkward muddy, rocky and rooty flat section at the start, you soon find yourself bouncing down a fast rocky chute, hanging on and hoping for the best as you’re blinded by the spray and flying mud.

Stage 2 was another favourite, on the Satterthwaite DH line, which was riding very differently to the last time it was used, in the National Champs. Deep mud, slippery rocks and roots made it a very different beast to the fast track you can fly down in drier conditions, as I discovered the hard way with a little “rest” half way down. 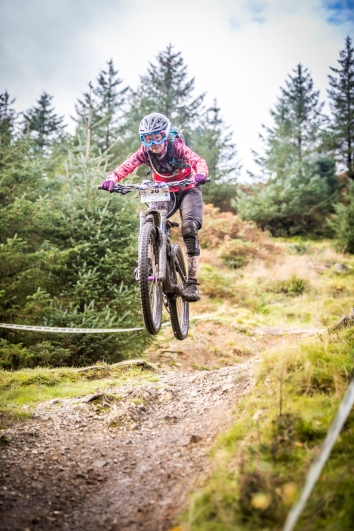 The next transition took us through a bog and up the ‘Three Witches’ bridleway to the other side of the forest, where we continued to climb up to Carron Crag for Stage 3. This was another familiar section of trail, but given the hash I made of the top section, I may as well have been riding it for the first time. The mud filled dips at the start made it difficult to pick up momentum initially, but this soon changed after dropping into the steep muddy chute lined with extra greasy sniper roots, which made squeezing through the tight trees even more difficult than usual. After a bit of tree leaning and power dabbing, I emerged into the open section where I promptly slid out on the slippier-than-usual left hander out of the trees, and proceeded to fumble my way along the narrow singletrack down to the fire road. Fortunately I made a much better job of the jumps and drops of the bottom section and managed to pick up a bit of time, but I certainly didn’t feel stoked about my run by the time I got to the end.

Stage 4 was down ‘Viking’, another classic Grizedale descent, which starts off the bridleway up to Parkamoor and ends on the banks of Coniston Water. The top section of Viking used to frighten the life out of me, but after having ridden its gnarly neighbour, ‘Super Steep’ in the Nationals, this steep, stepped, rooty channel now pales into insignificance. I’ve raced this stage a few times now, generally in wet conditions, and the top section has changed a lot over the past couple of years. What used to be a shallow rut through the tight trees, has now been carved into a deep, narrow chasm that’s wheel deep in places, which gave cause for some revised line choices. What hasn’t changed is the network of awkward roots and muddy dips at the top, which make for an extremely difficult start. With only a handful of riders managing to clean it in practice, Mike and Kev decided to change it to an alternative line for the race, which made it much easier to negotiate. With water flowing down steeper parts of the trail, and mud in abundance, it was a wild descent with plenty of off camber roots and loose rocks to catch you out, but this time I made it down the long descent without mishap, arriving at the bottom exhausted but elated. After getting my breath back, I went to take a big sip of water, only to discover that I was down to the dregs of my 1.5 litre Camelbak. Faced with the prospect of tackling the massive climb back up to Carron Crag and another two stages, without any water, my only option was to fill up my bladder from the little stream trickling down into Coniston. Feeling like one of those ‘Z’ list celebrities you find yourself shouting at on Bear Grylls’ Island, I inspected the contents, and, satisfied that it looked clear, decided to risk it. It also tasted a hell of a lot nicer than some tap water I’ve consumed, and at that moment in time, I didn’t care if I was struck down with E-Coli the next day, as long as I got round the course.

The water was definitely needed for the proceeding climb, and by the time I got to the top of Lawsons Park, I was adding whatever sachets of energy drink and electrolytes I could find in my bag to help get me round the rest of the course.

Stage 5 was a short but sweet blast down ‘Tight Brown’, another classic section of Grize-trail, famed for its big loose corners. Once again, water and mud were the the order of the day, and a covering of leaves masked some sniper rocks that could catch you out if you were unlucky.

From here, there was just a final push back up to Carron Crag for the final stage, which most of us had been dreading. The nadgery, twisty trail through the trees that had been built for the National Champs in March, had been tricky enough in the dry, but in these conditions, it was nigh on unrideable in places. Most people I’d spoken to had found themselves tripoding down much of the top section in practice, and, although I’d made a relatively respectable job of it in practice, I was all over the place in my race run. It was so muddy and slippy in places that putting a foot down offered even less traction than just relying on your tyres. The only saving grace was that they’d cut out an impossible gully that had been used back in March, and put in a much more rideable line, complete with some woodwork to help us over the worst of the bog. The new section also cut out most of the nasty climb out of the trees and offered a short cut onto the loose track down to the fireroad for the sprint to the final section. Once again the trail was a total mud bath, but it was nothing compared to the quagmire that lay in wait. The final sprint through the field had now become an actual mud chute that culminated in a pool of liquid cow shit. And if those didn’t have you off your bike wallowing around in excrement, the short greasy climb up to the finish line was enough to scupper most people, including overall winner and all round mtb legend, Adam Brayton.

The crowd pleasing, ritual humiliation was reminiscent of an 80s game show, and as I scrambled across the line, it felt like I was realising a childhood dream to appear on “It’s a Knock Out”. Google it, kids. By this stage, I was so accustomed to being coated in slop that I no longer cared, and the relief of finishing left me feeling happy as pig in cow shit.

My elation was increased further still when I handed in my transponder and discovered that I’d finished second in my category as well as second in the series overall. Climbing up on to the second step, twice, was a pretty sweet end to what had been a tough, but hugely enjoyable weekend.

Massive thanks to everyone who helped to make the series happen: the organisers, marshals, medics, hosts, sponsors, trail builders, and, of course, fellow riders.

A week later, I’m still scrubbing dirt out of my nails, but I do, at least, have a trophy gleaming down at me from the mantelpiece!

Such an epic descent! 👌
Buzzin’ from a big day in the forest with these babes! 🤟
One sweet ridge line! 👌
Not been up this way for a while - picked a good day for it! 😎👌
The stoke was high last weekend! 🤟
Sunshine and snow on today’s ride! ☀️❄️😳
Been cheesin’ all weekend, even on the hike-a-bikes! 😁
Another top day razzing with these beauts! 🤟
Follow Girl with a Singletrack Mind on WordPress.com