A tale of mountain bike theft

Shock, disbelief, panic and helplessness were just some of the emotions I experienced as I watched someone steal my beloved Ibis Mojo mountain bike from right under my nose, outside our home, and from within our gated driveway.

We’d just returned from an awesome day at Revolution Bike Park and were ferrying stuff into the flat when some [insert expletive], who must have been hiding in our driveway, saw his opportunity to get his dirty thieving hands on my bike. He’d obviously been watching us and waited until Dan had gone inside and I was on my own before helping himself.

In a state of shock, I wasn’t sure whether to pursue him myself or shout for Dan, who would have a much better chance of catching and apprehending him. I opted for the latter, but it was too late – the thief, and my bike had disappeared into the darkness. I couldn’t believe it. I’d turned my back for a matter of seconds, and she was gone. My most treasured possession, and only means of doing the thing I love.

Good times on my Mojo

After the initial shock, devastation ensued, followed by anger and frustration. I’m not ashamed to admit that I sobbed like a baby. Not just for the loss of my bike, but the realisation that I wasn’t going to be able to go mountain biking for quite some time.

It might sound silly, but it almost felt like losing a pet. We’d shared so many great times and been through a lot together. I may have thrown her around a bit, but I’d also given her a lot of TLC and invested a lot of time and money in changing and upgrading her parts, in return. We got on well together, I trusted her, and she’d helped me progress as a rider.

I kept wondering what had become of her, imagining her being abused by the horrible man who’d abducted her. I found myself checking out every bike I saw when out and about just incase it was her, and every time I came home, I’d relive the moment she’d been taken, wishing I’d acted differently or done more to prevent the thief getting away with her.

Not really expecting anything to come of it, I posted about the theft on Pinkbike and my Girl with a Singletrack Mind Facebook page. The response I got to the latter was overwhelming. I received countless comments and messages, and the post was shared well over a hundred times.

Eventually devastation turned to resignation, but there was a glimmer of hope that it might turn up, or at least be covered by insurance. Not that an insurance claim was going to be straightforward. Even if they did agree to pay out, all the components had been bought separately and upgraded over time, so it would be hard to place an exact value on her, not to mention difficult to source the parts.

Knowing how gutted I was not to be able to ride, Dan picked me up a second hand Orange Five so I could get back out on the trails asap. Although quite a different beast to my Ibis, I was determined to get on with the Orange just as well. In some respects it’s actually better than Mojo. Its 27.5 inch wheels make light work of obstacles, a superior groupset means it shifts like a dream, and it feels great charging down fast, open descents. However, I couldn’t help but pine for my light and nippy Mojo, especially when things got a bit more technical.

Needless to say, the insurance company tried to weasel its way out of paying up, but just as we were coming round to the idea that we were probably just going to have to take the hit, someone contacted us to say that they’d seen what they thought was Mojo, a couple of times, not far from our flat.

I couldn’t believe it. I never imagined that someone would be brazen, or stupid enough to parade around such a distinctive looking stolen bike so close to where it was taken from. I’d just assumed that it would either have been taken elsewhere to sell or broken up and sold as separate components. However, despite driving around the area on the look out several times over the following days, Mojo was nowhere to be seen.

When a few weeks went by with no further sightings, my hopes of us being reunited dwindled once more, until, one morning we got a message from the same guy to say he’d seen the bike up for auction just around the corner from my work. About half an hour later Dan received another message from one of his mates who’d also seen the auction listing and knew from Facebook that my Ibis had been stolen. We headed over to the auction house as quickly as possible, and lo and behold, there she was, safe and seemingly well, with only a couple of random things missing, such as the mud and chain guards. To say I was delighted is an understatement. Having been resigned to never seeing her again, it was almost surreal to see her there in front of me, although it did feel weird not to be able to just jump on and ride her away. 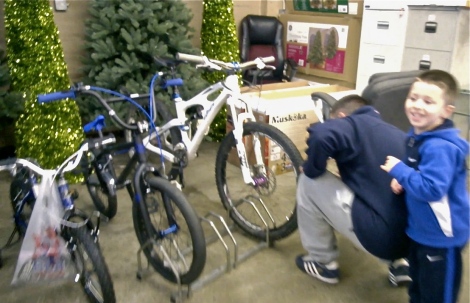 She looked totally out of place next to the old TVs and antique furniture, and perhaps unsurprisingly, was attracting quite a lot of interest. Fortunately we were able to get the auctioneers to remove her from the viewing while we contacted the police, and within a few days we had her home again. The individual who put her up for auction was apparently known to the police, but whether or not they’ll receive any kind of punishment remains to be seen.

In the interim, we were also contacted by someone else who’d seen Mojo on the auction listing, and thinking it seemed a bit suspect, had done a Google search for stolen Ibis mountain bikes and found our ad on Gumtree. We placed all three of those ads fairly half heartedly, not really expecting anything to come of them, but as it turned out, each one of them paid off.

I’m so grateful to everyone who spread the word about the theft of my bike, and particularly those who helped return her to me, against the odds. It’s a great testament to the support and camaraderie that exists within the UK’s awesome mountain biking community, and it’s something I feel privileged to be part of.

On closer inspection it transpired that Mojo hadn’t come out of her ordeal unscathed and there’s some damage to the frame and a few parts. She’s going to need a bit of TLC before she’s returned to her former self, but nonetheless, I’m over the moon to have my Mojo back.

Being chased down by @singletrackspaniel! 🚴🏼‍♀️🐕
Decided to join the kids at the pump track! 😆🤟
Spot the 🐶!
Fun times with my faves! 🫶
Sunny evening shreds with the crew! 😎🤟
#throwback to EWS Tweed Valley. Really wishing I was out in Petzen Jamnica for round two! Good luck to everyone who’s racing! 🤟
Post-race chillin’ with my #1 supporter, who was clearly as excited about that beer as I was! 🐶🍺
When Remi met Remi! ✌️
Follow Girl with a Singletrack Mind on WordPress.com