Having seen loads of pictures of people having fun in the snow back home in Scotland, I was experiencing serious FOMO, so when we arrived at Llandegla on Friday to find it covered in a thick blanket of snow, I was over the moon. 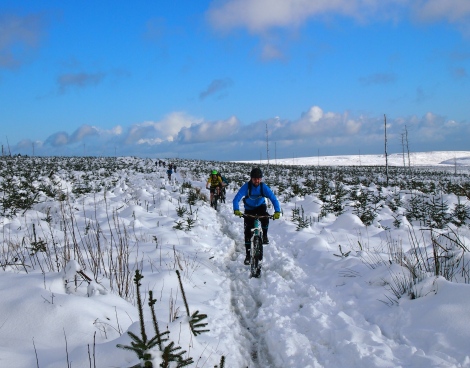 Although I’d heard they’d had a bit of snow, I wasn’t expecting there to be anywhere near as much as there was, particularly as there had been relatively little sign of it on the drive over. It wasn’t until we turned off the main road and started to climb the forestry track up to the car park, that the extent of the coverage became apparent, and even though the road had been cleared, it was still a bit of a challenge for our poor old Volvo.

Fortunately our bikes were better suited to the conditions than the car, with the exception of my skinny Ground Control rear tyre, which I’ve been meaning to change for weeks and was probably the least appropriate tyre for deep snow. In fact, what I really needed was a fat bike!

To be honest though, my rear tyre wasn’t really too much of a hindrance as everyone was sliding all over the place and struggling to get traction in places, regardless of their choice of rubber. Fortunately though, the snow was relatively dry and grippy, which made it fun to ride on rather than particularly treacherous. Having said that, I did have a couple of sketchy moments where I thought I might come a cropper; most notably on the steep rock gardens on the black descent, but I managed to stay on the bike for the whole ride… until, that is, the very last downhill section, when I wiped out on a berm. At least it was a soft landing though!

It took us way longer than usual to get round, but was so much fun that it didn’t matter. And as it was mostly sunny and still, it didn’t even feel particularly cold, although that might have had something to do with the fact that it required quite a lot more effort!

To top it all off, towards the end, massive snowflakes started to fall gently from the sky, making it feel, and look, like even more of a winter wonderland. It was a truly magical experience and, as with my last snowbiking sesh at Glentress this time last year, one that I’ll remember for a long time to come.