Having not ridden my mountain bike for nearly two weeks (I know), I couldn’t wait for my next day off, and was determined to get out on it, whatever the weather. In my excitement, I got planning Lake District routes that I was desperate to try, forgetting that, despite being 10 degrees Celsius outside, it was still the middle of January, in the Lake District. The route I really wanted to do was a loop including the north end of High Street and Ullswater, but as we approached the Lake District to find the hills shrouded in mist, it was time for a re-think. After some deliberation, we decided to head to Ambleside and ride a 27 km loop taking in Loughrigg Fell, Iron Keld, Hodge Close Quarry and Little Langdale, which was better suited to the conditions. 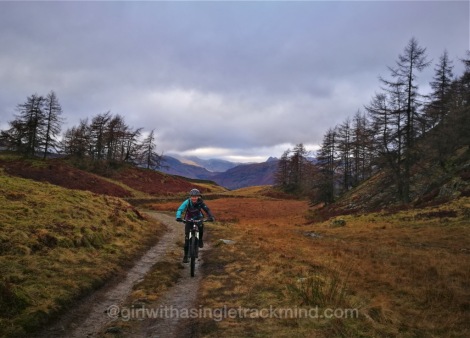 Heading west out of town, we soon joined a bridleway that climbed steeply up and over the lower end of Loughrigg Fell, before descending towards Skelwith Bridge. After following the road for a couple of kilometres, we rejoined the bridleway for another fairly steep and technical climb up Park Fell, from where we enjoyed some pretty stunning scenery, before skirting round Black Fell and descending through Iron Keld plantation.

After leaving what was left of the forest, we turned right to continue our descent on a great rocky track that looked like it had been ravaged by heavy machinery. It wasn’t long before we happened upon the likely culprits: two off road 4×4 vehicles lurching down the track. I’m not saying it was these two vehicles in particular that had chewed up the byway, but after seeing them in action, it was easy to see how the trail had become so badly eroded.

We were stuck behind these big brutes for ages as they trundled along at a snail’s pace, ruining not only the trail, but our ride. However, we eventually managed to get past them and enjoy what was left of the great rocky descent and technical climb up to Hodge Close quarry. We stopped for a while to peer over the cliff at the spectacular cavernous expanse below, and watch a couple of divers surface from the depths, but the roar of engines in lukewarm pursuit, and screech of spinning wheels quickly prompted us back into action.

After a short descent we arrived at an enormous heap of broken slate that was presumably the remnants from the former quarry. Despite the fact that there were two clearly defined trails to the left and right, the one we were trying to follow turned out to be cleverly disguised as a stream, which provided a little test for the navigation skills. As we splashed through the running water, over mini waterfalls, I still wasn’t convinced we’d gone the right way, but eventually it did start to resemble a more typical trail. It certainly wasn’t 4×4 friendly though, which was a bonus. 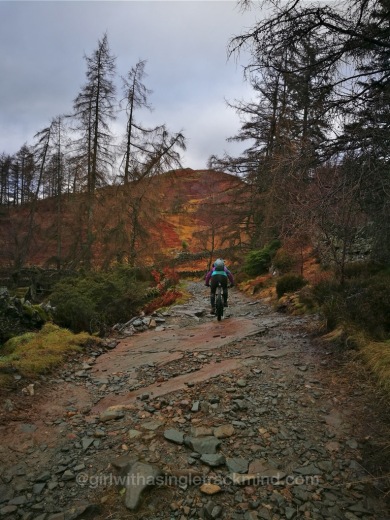 Relieved that we’d at least managed to shake them off, we continued onwards, enjoying the peace and quiet, but as we arrived at the next junction, who should be approaching from the opposite direction, but our four wheeled friends. Fortunately we managed to get ahead of them, and it did at least get us up the next climb quick sharp, as there’s nothing like having two wayward tanks on your ass to get you pedaling. We did, however, let them take the lead when we encountered a herd of Highland cows on the trail, that were being particularly protective of their young, although the mother didn’t seem remotely intimidated by them whatsoever. After leapfrogging them again, we ended up in front for the descent to Little Langdale Tarn, where we left them for dust. As we looked back across the water, we could see them in the distance, lumbering down the track like little toy cars.

From there it was a gentle road climb to the charming little village of Elterwater. With the sun already getting pretty low in the sky, sadly we didn’t have time to stop at the lovely little pub or café, but made a mental note for next time. 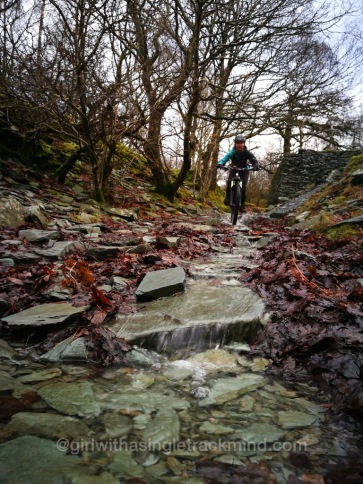 Continuing on, we eventually came out on the other side of Loughrigg Fell, where we traversed along ‘Loughrigg Terrace’, passing the southern end of Grasmere, before dropping down to the banks of Rydal Water, then following the road back to Ambleside.

Whilst cleaning the bikes, we both agreed that it’d been a great ride, and one that we’d happily do again. Having initially been disappointed not to be able to do the ride that I’d originally planned, it turned out to be a great alternative, and much more appropriate for the conditions. It’s a fantastic route for winter, or when the weather’s not great and you don’t want to go up too high. However, despite the lower altitude, there are still some tough climbs and great techy descents, as well as plenty of stunning scenery. The quarry and other caves that we encountered along the route were also an added bonus, with the only downside being our oversized trail mates. We may have just been unlucky to bump into them when we did, but judging by the condition of the green lanes in places, it’s clearly a route that they follow fairly regularly. I just hope that it won’t have changed too much by the next time we ride it.